NSWPL Player Points Table
About
​The NSW Player Points Table is a listing of each NSW Player who is awarded points from results generated in a Ranked Competition. The NSWPL is responsible for managing and updating the Player Points Table which is used as follows: Note: Some of the content on this page is taken from the NSWPL Competition Regulations. Go to the 'Documents' page to access a copy for a full explanation.
Points are awarded as follows: Note: This applies to competitions with more than 12 teams. Refer to the NSWPL Competition Regulations for details of competitions with less than 12 teams.
Player of the Year
The Player Points Table is used to record the results of players in competitions throughout the year to determine the Player of the Year for men and women in both Senior and Veteran categories. This award is based on the accumulation of points, at competitions included in the table. However, and very importantly, only a player's best 6 performances are counted at the end of the calendar year to determine who receives the awards. So even if you can't attend all tournaments you still have a chance of being the Player of the Year!

What is Seeding and How is it Used?​
Seeding is used in many sports in different ways. In tennis, using numbers-based statistics, it is applied to make it more likely that the higher ranked players progress through the rounds and the top two players will only meet in the final, assuming they keep winning! The NSWPL uses it in a less exacting fashion to separate the top 50% of teams from the rest to create two 'hats' out of which the teams are drawn for the qualification rounds; so a team from the 'top 50%' hat is drawn against a team from the 'Rest' hat. This seeding may be applied in the first round only in a Swiss system or a number of rounds in a qualification system. Refer to the NSWPL Competition Regulations for more details about competition systems.

The advantage of seeding is that the teams with a higher ranking are more likely to progress to subsequent rounds, which is desirable. Importantly, it protects the lower ranked teams who may go to the consolante. How? Well sometimes in a random draw a very good team could be drawn against 2 or 3 very good teams and lose sufficient games to not progress to the qualifying rounds. This would mean they are included in the consolante or lower division giving them a very good chance of winning it. That said, nothing is perfect, and a very good team of players newly arrived in the state and without points on the Player Points Table would be unseeded and this could cause a few unexpected results! After a few events, that team would presumably amass some points and they would then be seeded.

​Selecting Representative Teams
The NSWPL Player Points Table can be an important contributor to the selection of representative teams and as such players with ambitions to represent the State (or even Australia) are well advised to attend the contributing events and attempt to earn points.
So Being Awarded Points in the Player Points Table is Important?
Yes, it certainly is! You are awarded points only if you reach the awarded positions (see above). Also, if you have sufficient points to be seeded in the top 50% in the Ranked Competitions it may help you reach the awarded positions. Plus, you have the opportunity to try and improve your position for your own satisfaction! But don't worry, players must still perform and being unseeded does not mean you cannot win an event. It may just add to the challenge!

In a qualifying competition you need to reach the quarter or in smaller competitions the semi-finals, otherwise, you receive no points. In a Swiss system, you can lose a game or two in the early rounds but a strong performance in later rounds might lift you into the awarded positions (top 8 or top 4) otherwise you receive no points. So every game is worth full  effort!

So Being Awarded Points in the Ranking Table is Important!!

About the Columns in the Table
The Player Points Table is an Excel spreadsheet that features the following columns: These are listed in order by date and include:Note: These columns start ‘blank’ and are progressively filled as the competitions are played. This makes it very clear as to which events have been completed in the year to date and align to the points that have been awarded.
This image shows the top 30 places as of March 2020. To view the full 2020 Player Points Table, open this link: nsw_ranking__website_.xlsx 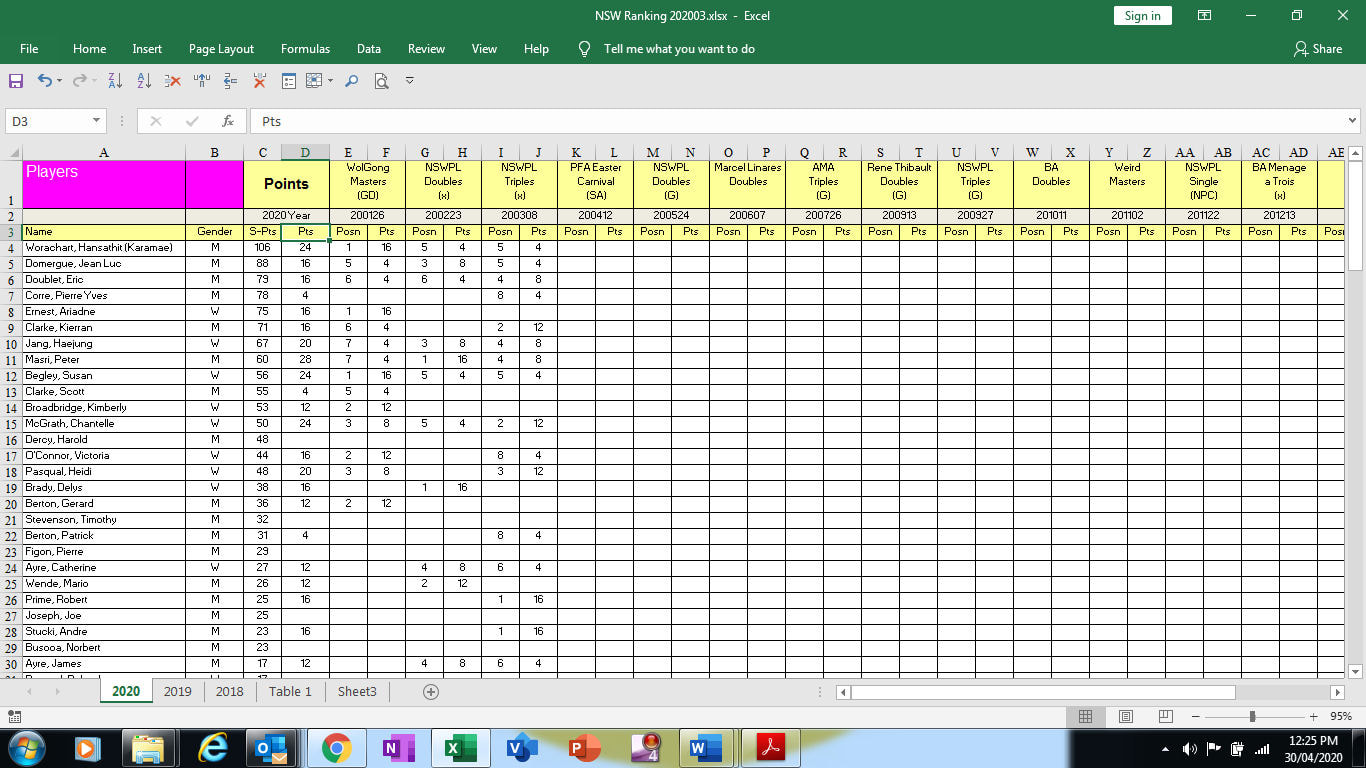 At the beginning of 2020 the Player Points Table has been reset to include each player's S-Pts total from the 2019 table but at 50% of the value. This provides recognition of previous performance which helps 'smooth out' the points should a player miss competitions through illness or other absence and  rewards consistency. These previous points are relevant to seeding (for those competitions for which it is required) and possibly selection for representative teams.
It is important to note that previous performance is not a factor in the awarding of 'Player of the Year' which is purely based on results in the calendar year. These are listed on the 'Pts' This means that a player in a particular category may be ranked highest but not win Player of the Year because another player's best 6 performances add up to more points!